In May 2007 our motorcycle gang, The Mild Ones, regrouped for a tour of the birth of the blues on Highway 61 in Mississippi. Tom had been talking about and organizing this trip for about a year. This would also be Jane's first motorcycle trip of more than a weekend. It took lots of creative packing but we were able to load everything that we needed.

Tom/Claire, Charlie/Janice, and Clif/Terry along with Terry's visiting high school friend from Brazil, Jussara, set out from Houston for New Orleans on Friday. Jane and I had alreday been to New Orleans this year and decided to catch up to the group at Natchez, MS on Sunday, May 13. I didn't take many pictures in Natchez as we had been there two years ago and I already had many photos.

After a night in Natchez, we headed up the Natchez Trace Parkway and spent the night in Jackson at the Hampton Inn. Here's a short clip of us riding. Tom took us to the 930 Blues Cafe aka a "juke joint". We had a good evening listening to blues music and checking out the locals.

On Tueday morning we headed for Greenville, MS by way of Vicksburg. After lunch in a casino in Vicksburg, everyone sort of scattered. Jane and I headed into downtown Vicksburg to shop. When we heard thunder, we saddled up and tried to out-run the storm. We were caught in a huge downpour with high cross-winds. Our rainsuits kept us dry and we were able to plow on through the rain. We met up with everyone else at the Holiday Inn Express in Greenville. Dinner was at Doe's Eat Place which claims to have the best steaks in the world. After a wonderful, thick filet I'd have to say that they just might be right. The combination of the wait for a table and the length of the fine meal meant no music that evening.

The following day (Wednesday) we rode around and checked out downtown Greenville and the Mississippi. Tom stopped at the Walnut Street Blues Bar and they arranged to have legendary blues man T-Model Ford come and play for us. T-Model is well over 80 but can still play and sing. We got a chance to talk to him a bit and this might have been the highlight of the trip for Tom. Charlie got to sit in on drums for a few numbers as well.

On Thursday we left Greenville for Clarksdale with a stop for lunch and shopping in Cleveland, MS. Located in the Mississippi Delta, the birthplace of the blues, Clarksdale is home to the internationally known Delta Blues Museum and "the crossroads", where some believe Robert Johnson sold his soul to the devil at the stroke of midnight in exchange for the ability to play the blues. Located here is actor Morgan Freeman's blues club, Ground Zero, and his upscale restaurant, Madidi. Over the two days that we were in Clarksdale, we hit Ground Zero on two nights and ate at Madidi as well as several other local spots. Frankly, we were a bit disappointed in Madidi, which is supposed to be a 5-star place. Dinner was good, not great, and dessert was a letdown.

Ground Zero has a Blues Jam on Thursday nights. Charlie got to sit in on drums with the band for a few numbers. Here are a couple of videos of the music at the Club, including two where Charlie is playing. Note that these are big files.
Blues clip.
Charlie clip #1.
Charlie clip #2.

On Saturday, Jane and I left the group and started for home. They continued on to Memphis and then Hot Springs, AR. We stopped for a few hours in Little Rock to see the Clinton Presidential Complex and then spent the night in Marshall, TX. We got home on Sunday, May 23 after a week away.

Everyone we met in Mississippi was extremely friendly. We all remarked as to how it probably had the most friendly and helpful people we had met anywhere. From bringing in T-Model Ford to play for us to the insights and general hospitality of everyone we encountered, it was a great trip up Rt. 61.

I didn't take a lot of pictures on this trip. With Clif and Charlie along, there are shutters snapping continuously. You can read/see a play-by-play of the trip on Clif's blog. You can also check out Clif's pictures of the trip and Charlie's photos. 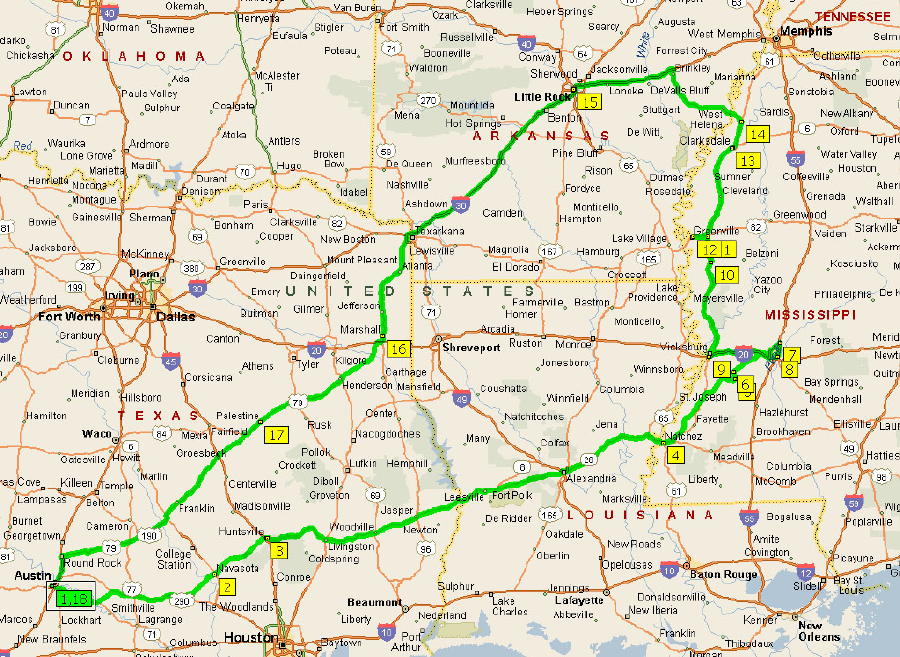